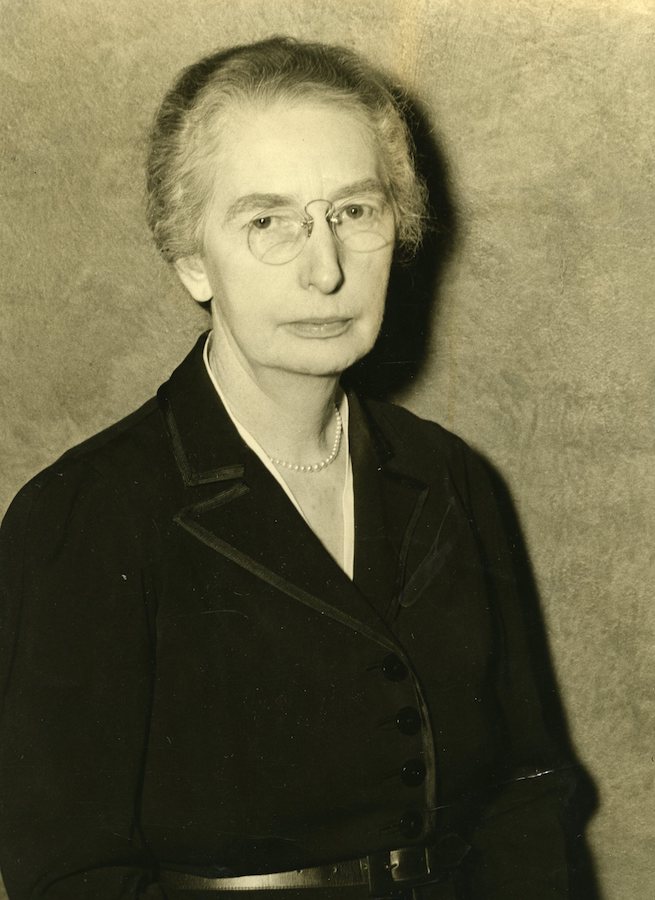 The Alhecama Theatre at 914 Santa Barbara Street was christened by Alice Schott, shortly after she and her husband purchased the property in 1939. The name is derived from the first two letters of each of her four daughters’ names: Alice, Helen, Catherine, and Mary Lou. The woman who gave the theatre its name was one of the city’s most active community leaders for some fifty years.

Alice Florence Touhy was born in Nebraska on June 17, 1881, the anniversary she later liked to point out, of the battle of Bunker Hill. As a young child she took up painting and this love of art would stay with her for the rest of her life. A second life- long interest came from her days at nursing school in Denver; she became very involved in women’s health issues.

In Denver she met German native Max Schott, who made his U.S. fortune in mining and metals. They married in 1912. In 1920, the couple moved to Santa Barbara, it being Max Schott’s intention to retire. He changed his mind and for many years the Schotts maintained homes both here and in New York City where Alice became especially interested in housing issues in Harlem. In the 1930s the couple helped bring many German refugees fleeing Nazi oppression to the U.S.

In Santa Barbara, Alice joined the Woman’s Club. As president in 1927-28, she was one of the prime movers in raising $72,000 to secure the Rockwood site in Mission Canyon for the club, using her own money to initially secure the property. In 1939, the Schotts bought the theatre and surrounding complex of buildings in the 900 block of Santa Barbara Street to save them from destruction. She hoped to revive the Community Arts Association, which had been headquartered there and which had been brought low by the Depression. Then in 1945 the complex was transferred to the Santa Barbara High School District, which at that time ran the city’s adult education programs. The Alhecama Center served as adult education headquarters for thirty years. Adult education moved to the former Garfield School at 310 West Padre Street in 1980, and the school was re-named the Alice F. Schott Continuing Education Center the following year, in recognition of her contributions to education in the city.

Max Schott died in 1955, but Alice continued her philanthropy and activism. She was instrumental in founding Planned Parenthood here and was active with the Visiting Nurses Association. She counted among her friends Margaret Sanger, a national leader in women’s health issues, and Katherine McCormick, one of the chief financial supporters involving development of the birth control pill. Both McCormick and Schott were major supporters of the Santa Barbara Museum of Art. Schott served on the Museum board as well as the boards of the Santa Barbara Foundation and the Lobero Theatre Foundation, among others. She was selected Santa Barbara’s Woman of the Year in 1962.

Alice Schott died in 1971. Her impact on Santa Barbara was immense. As one observer put it upon the occasion of her passing, “All activities which gave promise of enriching the life, exciting the mind, relieving the suffering of the unfortunate, commanded her interest and effective support.”