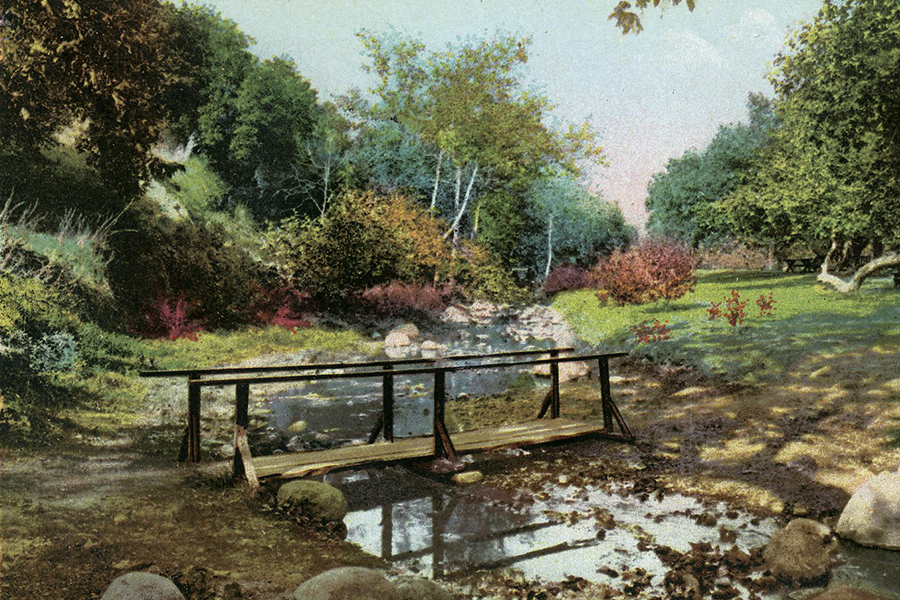 Santa Barbara’s Children Donated Nickels and Dimes to Buy It

In a sense, Oak Park, located along Alamar Avenue between Tallant Road and West Junipero Street, may be considered one of the oldest parks in Santa Barbara.  As far back as the Spanish era, this oak-lined section of Mission Creek was a popular gathering place for recreational activities.  It was not until 1904, however, when the area was threatened with accelerated development, that Oak Park officially came into being.

The man largely responsible for saving the park site from becoming a housing tract was Henry Tallant.  Born in England in 1821, he immigrated to Wheeling, West Virginia in 1845, where he and his brothers opened a dry goods business.  Active in local politics, Henry worked to keep West Virginia on the Union side at the outset of the Civil War.  A short time later, he relocated to Baltimore.  The family business reached the brink of ruin during the nationwide depression of 1873, losing over seventy-five thousand dollars.  Henry and his family pulled up stakes and headed west.

They came to Santa Barbara, and set up housekeeping on De la Vina Street.  Tallant would later become, along with Samuel Brinkerhoff, a major real estate owner on today’s Brinkerhoff Avenue, where he eventually built a home.

With the opening of Cottage Hospital in 1891, the upper Westside became a target for development, a trend that quickened when a streetcar line was run up into the neighborhood in 1896.  In 1903, the owners of the 17-acre parcel that would become Oak Park looked to subdivide the property and put it on the market.  Henry Tallant now stepped forward to preserve this sylvan stretch of Mission Creek.

Both he and his wife, Caroline, had been active in civic affairs.  A doctor’s daughter, Caroline had sat on the first board of directors of Cottage Hospital.  Henry organized a fund drive, to which the city’s children contributed their dimes and nickels.  Their parents kicked in by passing a $15,000 bond issue and most of the land for the park was soon purchased.

The park was a city favorite.  The Park Board planted some one hundred new trees and, in these early days, trout still ran in the creek.  Much of the park’s popularity was due to its naturalistic setting; unlike some other city parks, Oak Park was not planted with exotics.  The park became the scene of highly popular Sunday band concerts and as recreational habits changed, barbecue pits, tennis courts, and a wading pool were installed during the course of the 1920s, which somewhat lessened the rustic nature of the park.

Added in 1941 was a wooden dance platform.  This had originally belonged to the Colin Campbell family whose estate was located in the Devereux Point area out in Goleta.  The platform had been built especially for a dinner-dance given in honor of the Prince of Wales and his brother George, who visited the ranch in 1926.  Reportedly, the party was less than a success; Prohibition was in force and the disappointed royal guests took their early leave.  Peter Irvine, a Goleta farmer, purchased the platform when the estate’s holdings were auctioned off in 1941 and transferred it to Oak Park.

Beginning in the 1970s, Oak Park became the scene of a series of ethnic festivals that, at their height, took place throughout most of the year.  Today Henry Tallant is memorialized by Tallant Road and by a plaque in the park that reads, “Erected June 26, 1909 By the School Children in Honor of Mr. Henry Tallant through whose efforts Oak Park was secured for Santa Barbara.”

This article was first published in the Santa Barbara Independent.