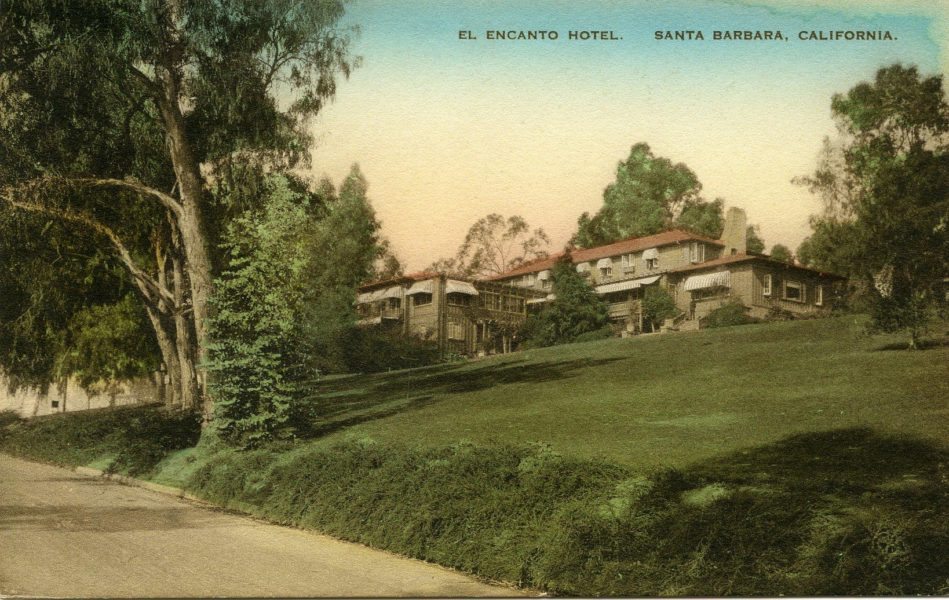 One of the most engaging neighborhoods in Santa Barbara is the Riviera, with its commanding views of the city and the Pacific. For many decades, however, the populace eschewed the Riviera as a place to live. It was treeless, rock-strewn, and far from the city’s center. When Charles Storke, father of Thomas Storke, founder of the Santa Barbara News-Press, bought land there in the 1870s the purchase was called “Storke’s Folly.”

This began to change in 1913, when the Santa Barbara State Normal School, the predecessor of UC Santa Barbara, moved from its downtown location to a larger campus on the Riviera and the streetcar line was constructed up to the new site. Entrepreneurs began to buy up land thinking that the new campus could become the center of a thriving neighborhood. One one these speculators was James Warren.

In June, 1913, he hired two local architects, Winsor Soule and E. Russell Ray, to design a complex of six residences of varying sizes on his property, which was adjacent to the new Normal School campus. The school was to open its new quarters that fall. Warren hoped to take advantage of the expected influx of faculty and students to the area by offering conveniently located rental housing. This plan was the genesis of El Encanto (The Enchanted).

Warren’s idea never really worked out. By late 1916, only three of the units were rented by students. Unexpectedly, the complex was turning into a small art colony. It had become home to landscapist William Otte, portraitist Clarence Mattei (whose father had founded Mattei’s Tavern in Los Olivos), and plein air painter John Gamble. In the summer of 1917, Warren once again hired Winsor Soule — this time to design a large building which would become the core of a cottage hotel.

The cottages already on the property were completely redone. Steam heating and telephones were added for the comfort and convenience of guests. Elegance was the watchword. Each guest was offered his or her own private stenographer to help in writing cards and letters home. The parlor of the new main building was graced by a John Gamble painting in its custom built-in frame over the large fireplace. Finally, of course there was that incredible view which took in the city of Santa Barbara, the Channel Islands, the Rincon, and the Goleta Valley.

By 1929, the site contained twelve units and was expanded yet again in the early 1930s when the A. K. Bennett Hotel Corporation bought the hotel. Under its ownership, guests could actually buy stock in the corporation and thereby earn the right to have a cottage designed to their liking.

Famed hotelier Frank J. McCoy bought El Encanto in 1938 and today it is one of the city’s oldest hotels, still famous for that “enchanted” view.

This article appeared in the Santa Barbara Independent.