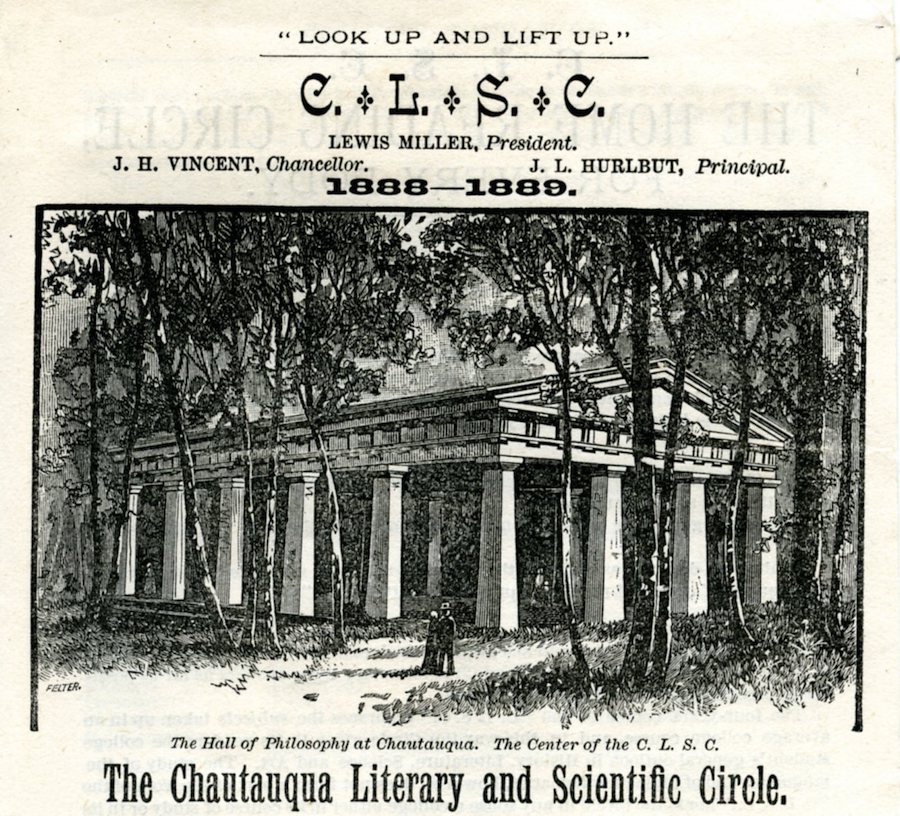 For some forty years, Santa Barbara was very much a part of the Chautauqua movement which took the nation by storm in the early 1900s. When the traveling Chautauqua arrived in the summer of 1916, locals were treated to a dazzling week-long program of drama, dance, music, vaudeville, lectures, and literary readings, all presented inside a tent pavilion which seated 2,000 patrons.

The Chautauqua movement was named after Chautauqua Lake in western New York and its origins harkened back to the lyceum movement of the early 1800s. The lyceum movement was a system to book lecturers for communities. Included among the participants during this early period were Ralph Waldo Emerson, Richard Henry Dana, Jr., Horace Greeley, and Oliver Wendell Holmes. Later speakers included Mark Twain and P.T. Barnum. Lecture topics ran the gamut from literature to history to art to religion to morals to humor with occasional musical programs.

Chautauqua dates from 1873 when John H. Vincent and Lewis Miller staged programs of moral and spiritual uplift for Sunday school teachers on the shore of Chautauqua Lake. In the next few years these annual summer programs were opened to the public, and expanded to include a variety of entertainments. Within 50 years some 200 Chautauqua centers were established around the country. In 1904, the traveling or tent Chautauqua was founded.

Another aspect of the movement was the Chautauqua Literary and Scientific Circle. The national organization set study guidelines and published texts for groups which met in members’ homes. One 1881 Santa Barbara session included a presentation on the history of art, a musical selection, and a poetry reading. Prospective members, after “mature deliberation,” applied for entry. Annual dues were fifty cents, and members could “graduate” after fours years of study. Members were expected to devote at least four hours every week from October to July in reading and study. The aim was “to develop the habit of close, connected, persistent thinking.” In the mid-1880s, the Santa Barbara chapter had some 20 members.

In the fall of 1915, plans were laid to bring a Chautauqua event here for summer 1916, in part to attract tourists. The giant tent was set up on the grounds of the high school, at that time located in the block bounded by De la Vina, Victoria, Chapala, and Anapamu streets. The program had a strongly moralistic flavor with lectures such as “The Right Education for the Rising Generation” and “The Remedy for Evil.” Dramatic productions and popular and classical music were also important parts of the festivities. All of this could be enjoyed at the cost of $2.50 for a season ticket.

There was heavy emphasis in the involvement of children. There were daily recreational activities, as well as week-long stage training which resulted in a show for the delighted adults at week’s end by the children wearing costumes of their own making. The heyday of Chautauqua ended in the 1930s, caused by the onset of the Depression, the development of sound movies and of commercial radio, and the growth in automobile travel. With communities less isolated, Chautauqua lost its cachet.

Chautauqua did, however, return to Santa Barbara. In 1992, to commemorate Christopher Columbus’ 1492 voyage to the New World, a touring Chautauqua Program offered four days of performances and workshops on Native American, California, and U.S. history. It was the latest local chapter in what Theodore Roosevelt once called “the most American thing in America.”