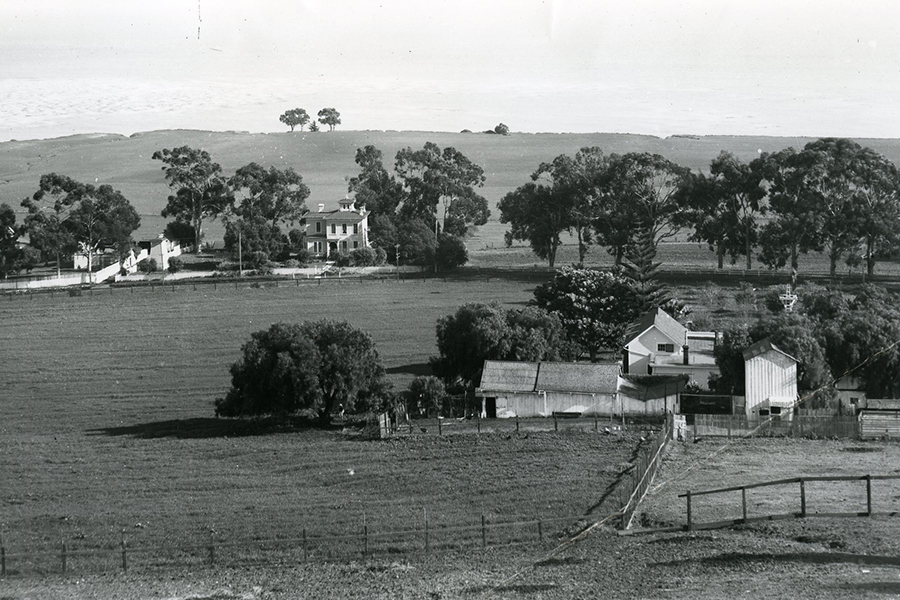 Image: The Mesa, shown circa 1890, was largely uninhabited in modern times, belonging mostly to farm families.

A Brief History of the Ocean-Side Neighborhood

The Mesa is the Santa Barbara neighborhood that stretches from the harbor along the coast to Arroyo Burro Beach, flanked on the south by the Pacific and on the north by small hills. For decades the Mesa was sparsely settled, with only a few farmers tilling its soil.

Mesa, the Spanish word for table or plateau, aptly describes this area. The Chumash apparently had villages at both ends of the Mesa, at Arroyo Burro and the heights overlooking today’s harbor. The stretch of land in between remained uninhabited.

The Spanish upon their arrival in 1782 also forsook the Mesa as a site for any settlement. They did apparently establish a lookout or outpost on the bluffs overlooking the harbor area. Where the Naval Reserve building now sits, the bluffs used to come down to the water’s edge, capped off by a large outcropping called Castle Rock. The demolition of Castle Rock, the construction of the harbor, and the extension of Cabrillo Boulevard up onto the Mesa transformed this area.

The Mesa remained largely undisturbed until shortly after Santa Barbara incorporated as an American city in 1850. During this decade the federal government decided to build a series of lighthouses along the California coast, and a site was selected for Santa Barbara about one mile east of Arroyo Burro.

The coal-oil light went into operation in December 1856. The lighthouse was in an isolated spot; the nearest fresh water supply was a mile away, and roads were few and crude. In 1865 Julia Williams became the lighthouse keeper, and for the next 40 years, she lit the lamp nightly and faithfully maintained the station. She finally relinquished her post in 1905, when a fall incapacitated her. The lighthouse was wrecked in the 1925 earthquake and was replaced by an automated light.

During the last half of the 1800s, the Mesa became, as author Walker Tompkins put it, “a crazy quilt of farms ranging from 20 to over 200 acres.” A wide variety of crops were grown, although beans seemed to be a staple. One of the major landowners in the area was Charles Potter Low. His farm was located about where Shoreline Park is today. A former clipper ship captain, he retired to Santa Barbara in the late 1870s. He hired Peter Barber, the city’s most prominent architect of the period, to design an elegant Victorian home near the intersection of present-day Marina and Cliff drives. The house was eventually torn down.

The discovery of oil in the vicinity of Flora Vista Drive in 1922 by the Puritan Oil Company set off a brief flurry of speculation. Derricks sprouted throughout the Mesa, but the oil brought up was of a very poor quality. The most productive well, near Mesa Lane, produced less than 30,000 barrels and was shut down after only a year. Drilling continued haphazardly into the 1930s, but by end of the decade the Mesa’s “oil boom” had come to a close. The last lone well shut down in 1971.

By the end of World War II, the housing shortage in Santa Barbara was reaching critical levels. Marine Terrace, the first housing subdivision on the Mesa, located on Captain Low’s old farm, was laid out in the late 1940s. Once shunned due to its relative isolation and cooler temperatures, the Mesa was soon to become one of the city’s most desired neighborhoods.

This article first appeared in the Santa Barbara Independent.