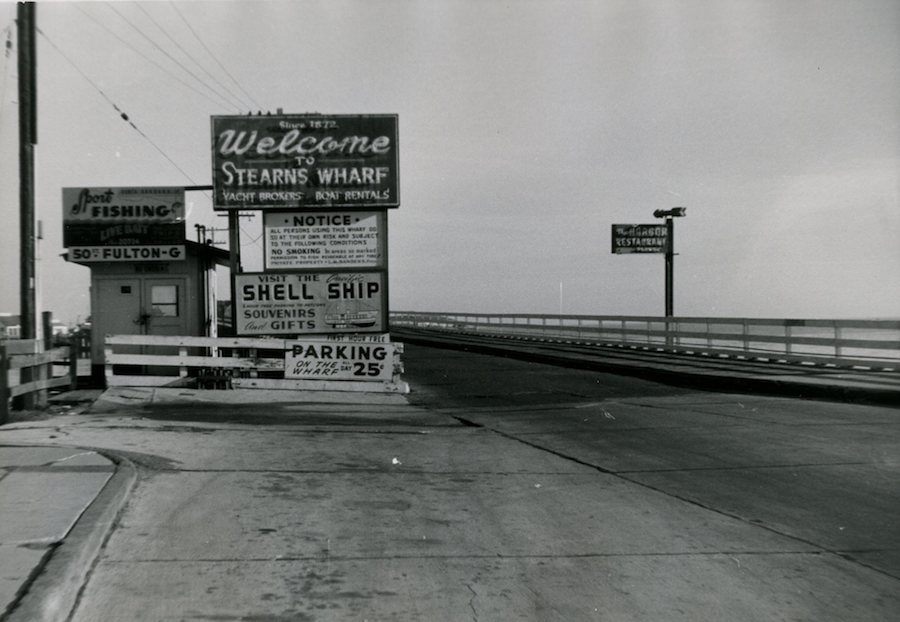 The years following World War II saw an evolution in the use of Stearns Wharf. Previously, the wharf had served as the city’s primary commercial shipping center as well as the headquarters of the local fishing industry. In the postwar years, recreation and tourism would play an ever more important role.

For the first 2 ½ years of the war, the wharf was closed to the public and was under the control of the Navy then the Coast Guard. The movements of the local fishing fleet were curtailed due to concerns over sabotage and fifth columnists. Initially, boats could not stay out overnight; by 1943, boats were allowed out five nights. Stearns Wharf was re-opened to the public in the spring of 1944. In October 1945, a syndicate which included film actor James Cagney bought the wharf franchise for some $200,000. The group intended to emphasize tourism and recreation over commercial activity.

There were problems. The wharf had not been maintained and both the pilings and deck were in disrepair. The new owners were shocked to learn that to bring the wharf back into shape would cost more than the purchase price and would require over ten million board feet of lumber. This price tag plus squabbling within the group caused another sale of the wharf in the spring of 1947.

The purchaser was local furniture dealer, Leo Saunders. By this time less than half of the wharf was being used commercially, although three fishing companies still used it as headquarters. The days of the wharf as a primary commercial shipping center were virtually at an end. Tenants of the wharf now included the Harbor Restaurant, the Yacht Club, and a second restaurant.

The era of Saunders’ ownership was a stormy one. Charges flew that sewage from the wharf was polluting the beach and surrounding waters, but Saunders balked at the cost of fixing the problem. Yet in 1948 the city gave a new 25-year operations lease to Saunders. Wrangling over repairs continued, with city and state authorities demanding progress. Saunders did commission some work, but continued to complain about costs. In 1955, Saunders relinquished control of the wharf and a new group purchased the franchise. One of the major partners was George Castagnola, whose fishing operation called the wharf home. The new franchise holders realized that major repairs could no longer be delayed. The first new pilings arrived in the spring of 1955 and by 1972 the group had spent some $1 million in upgrades.

Recreation continued to play a growing role. Moby Dick’s Coffee Shop opened and the Castagnola group bought the Harbor Restaurant and poured over $200,000 into improvements. Fishing operations moved from the wharf to the harbor’s Navy Pier in 1961. The oil industry arrived on the wharf; the first offshore oil rigs began operations in 1958.

The 1969 oil spill and the 1973 fire which consumed the Harbor Restaurant together began yet another era in the wharf’s history. After an eight-year closure, the wharf re-opened in 1981 under the auspices of the City of Santa Barbara, its commercial purpose relegated to history. The wharf now became one of the most popular tourist destinations in the city and remains so today.