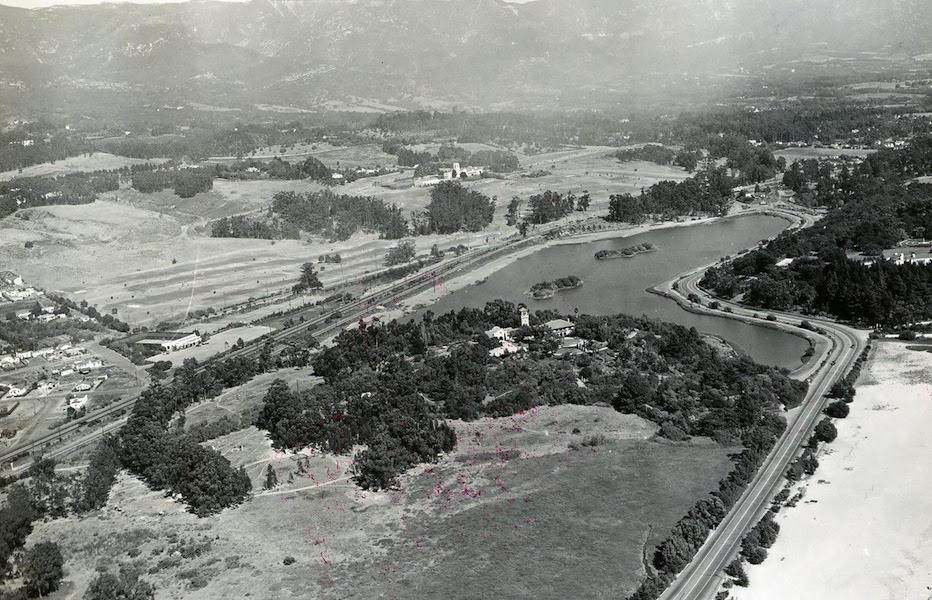 One of the most tranquil places on the South Coast is the Andrée Clark Bird Refuge. The serenity of this park today holds little clue to this area’s colorful past.

In the mid-1800s, this low-lying area was known as the Estero (Lagoon) or the Salt Pond. Storms and high tides would inundate the site with ocean water. During the summer, when the brackish waters would recede, locals would congregate to gather salt from the lagoon bed.

The area was also a popular recreation spot. In 1873, John Bradley, a horse breeder and entrepreneur, bought the property with the intent of building a race track. The grand opening of Ocean Beach Park Track took place on July 4, 1874. Some 1000 people attended the festivities. The location was not ideal, for water continued to collect in low-lying areas making the track unusable for long periods of time. Bradley even considered turning the track over to farming in 1877, but heavy salt concentrations precluded agricultural use. The track remained open, through good times and bad, until 1886 when the Agricultural Park and Race Track was opened, in yet another swampy area, at the foot of Laguna Street.

The site had a number of owners until 1906. A group of oil developers was interested in the property, but were prevented from moving forward when a group of 70 citizens paid $6,000 for the site with the idea of holding it until the city could purchase it. In 1909 a bond measure to buy the land failed by 37 votes, but the city managed to scrape together $7,400 to proceed with the transfer. The land was dubbed Citizen’s Park.

The park remained undeveloped as use proposals were bandied about. One of the most persistent ideas was to transform it into a harbor, “La Puerta al Mar.” The city turned down the idea, primarily because roads would have to be re-routed to see the project through.

In 1917 a group of 500 schoolchildren presented the city with a petition to turn the park into a bird refuge. The city granted the request and there the refuge sat, a victim of sad neglect, for over 10 years.

This state of affairs was transformed in 1928. Anna Clark lived in the family’s bluff-top estate overlooking East Beach and thus knew firsthand of the sad state of the refuge. Working with her daughter, Huguette, the latter gave $50,000 to transform the refuge into a freshwater lake, with three man-made islands, landscaping, walkways and bridle paths. The park was christened the Andrée Clark Bird Refuge, after Huguette’s deceased older sister. Today the Bird Refuge remains one of Santa Barbara’s gems.